I created the following Grammar Lesson many years ago:

Like many people my age, my first programming language was BASIC. Next I learned Pascal, which I found to be extremely expressive. Learning C was difficult, because it required me to be closer to the metal.

Graduating to C++ made a positive difference. Object-oriented programming affords ways to encapsulate the aspects of the code that are close to the metal, allowing one to ascend to higher levels of abstraction, and express the things that really matter (I realize many programmers would take issue with this – claiming that hardware matters a lot).

Having since learned Java, and then later…JavaScript, I have come to the opinion that the more like natural language I can make my code, the happier I am.

Opinions vary of course, and that’s a good thing. Many programmers don’t like verbosity. Opinions vary on strong vs. weak typed languages. The list goes on. It’s good to have different languages to accommodate differing work styles and technical needs.

if you believe that artificial languages (i.e., programming languages) need to be organic, evolvable, plastic, adaptable, and expressive (like natural language, only precise and resistant to ambiguity and interpretation), what’s the right balance?

I think it could – and should – be all of these.

Sarah Mei has an opinion. She says that Programming is Not Math.

Programming with Nouns and Verbs

First: let me just make a request of all programmers out there. When you are trying to come up with a name for a function, PLEASE include a verb. Functions DO things. Like any other kind of language, your code will grow in a healthy way within the ecology of human communicators if you make it appropriately expressive.

Don’t believe me? Wait until you’ve lived through several companies and watched a codebase try to survive through three generations of developers. Poorly-communicating software, put into the wrong hands, can set off a pathological chain of events, ending in ultimate demise. Healthy communication keeps marriages and friendships from breaking down. The same is true of software.

When I read code, I unconsciously look for the verbs and nouns to understand it.

When I can’t identify any nouns or verbs, when I can’t figure out “who” is doing “what” to “whom”, I become cranky, and prone to breaking things around me. Imagine having to read a novel where all the verbs look like nouns and all the nouns look like verbs. It would make you cranky, right?

The human brain is wired for nouns and verbs, and each is processed in a different cortical region. 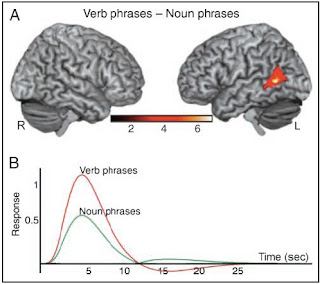 There are two entities in the universe that use software: